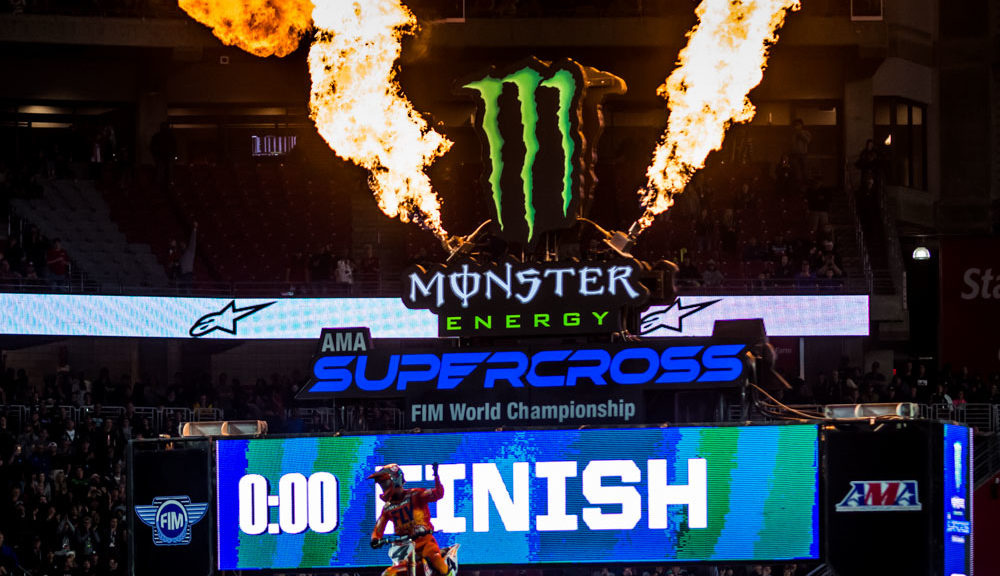 Supercross in a covered football stadium, with the football field moved outside, provides State Farm Stadium to give us the biggest track of the year for round two of the Monster Energy AMA Supercross series, a FIM World Championship. The biggest track with the longest start straight has provided some of the best racing the last couple years since the race was moved to Glendale and this year was no different.  After last weeks battle with the elements, round two was guaranteed to be held in a perfect environment.  Check out who finished in the top five in each class.

Compared to last week’s disjointed first round, Cianciarulo had just about the perfect Glendale race. He missed out on the top qualifying spot by one hundreth of second, but that did not deter him. He went out and won his heat race then grabbed the holeshot in the main and led the entire 15min+1.  Will he have that consistent of a day in next week’s triple crown race?

Colt Nichols did not let off the gas from last week’s series opener win. He was consistently at the top of the leader board during qualifying and he won his heat race. In the main, he could not catch race winner Ciansiarulo but with his second place finish he retains the points lead and the red number plate.

Mcelrath was in the conversation leasing up to the start of the series as a title contender. He was off the pace with in qualifying (6th) and was losing touch with eventual race winner Adam Cianciarulo in his heat race.  Sitting third in points after two rounds he will need to pick it up in this short regional West series

RJ had a quiet night. He finished where he qualified, 4th, and 3rd in his heat race. After the aggression he had a A1, he seemed to have checked it at the door for round 2. With the triple crown next week he’ll have three chances to get back to pushing his way to the front.

The Rippa’ had good speed all day and improved from last weekends opener by two spots.  Much like Hampshire, Decotis finished where he qualified.  He stepped it up in the heat finishing second but he couldn’t bring that speed into the main. Decotis is a grinder so the triple crown format should be good for him.

After Baggett’s fastest-qualifier-to-twelfth plast last weekend he was a bit of a question mark coming into Glendale especially after qualifying 15th! He was sitting in fourth place in the main when misfortune struck Malcolm Stewart and the red flag came out. Everyone was bunched together and after the restart Baggett flipped the El Chupacabra switch and made his way to the front to clinch his first 450SX win.

Much like Baggett, Jason Anderson needed a good showing after finishing out of the top ten at round 1. It was like a different rider this week showing the fight that earned him the #1 plate. He moved into the lead past Ken Roczen after the restart, but he could not hold off his rival Baggett and landed on the second step. Is El Hombre back?

It was all going to plan for Ken Roczen in the main.  He got the holeshot and was building his lead to over two seconds on Jason Anderson until the restart. Once they were bunched back up Roczen could not build that cushion back up and had the lead taken when he was taken out by Anderson. After remounting he was not able to catch up to the lead group. But he has been the most consistent after two rounds and will wear the red number plate heading into round 3.

The Glendale stadium could have been renamed the House Eli Built considering his history here. Winning in convincing fashion the last couple years, Glendale SX was where Tomac turned his seasons around. This year it would not be the case.  He collided with a couple riders right out of the gate in his heat. It took him a bit to make sure his KXF450 was still race capable and finished the first lap in first. He made it to 10th and had to go to the LCQ which he won handily. The main did not go like in previous years where he was riding a gear higher than the rest. He wasn’t making much time before the restart and after was much of the same. Tomac fans are hoping for a building momentum rather than the highs and lows Tomac has shown the last two years.

Marvin Musquin has the speed, but only for short periods of time. It looks like his off season knee issue is lingering into the start of the season. He qualified fourth and improved his finishing position from round 1, but he will need more if he is to be in contention after 17 rounds. With the season in full swing will he be able to rehab his knee enough to be up in the front? Next week’s three moto triple crown will put it to the test.

This site uses Akismet to reduce spam. Learn how your comment data is processed.