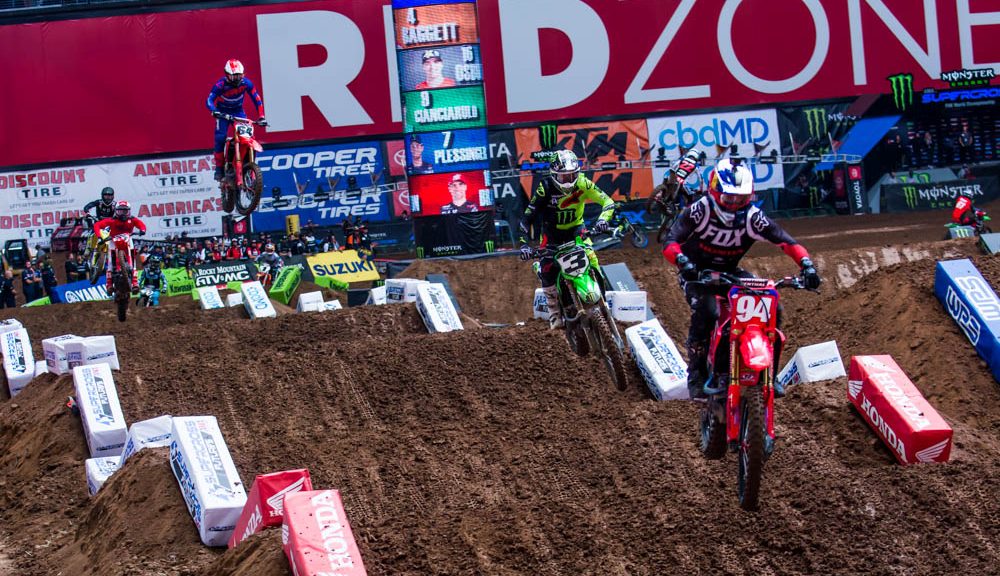 The Monster Energy Supercross triple crown format shakes things up for the riders and offers a new level of entertainment for the fans. Having to qualify for the night show through the timed qualifiers and an LCQ during the day, there is more on the line when the gate drops after the opening ceremonies. The riders have to bring their A game to the gate three times. Add to the fact that State Farm Stadium lays out the longest start straight of the season, three gate drops can be pretty intimidating. Who was able to string together three good finishes? Check out the podium finishers from the Glendale Supercross:

Ken Roczen: Roczen was not only able to string together three good finishes, he put together three perfect finishes going 1-1-1.  It was not all rainbows for the Honda rider. He had Eli Tomac putting the pressure on during the first race but never succumbed to the Kawasaki. Two great starts in the other two races and Roczen’s ability to sprint out to an early lead saw him grab the first main event sweep since the Triple Crown was introduced to the series.

Eli Tomac : Tomac has had some dominating performances in Glendale and he has had the most success when it comes to triple crown races (three previous overall wins; five individual race wins; 56 laps lead). It looked like he was going to continue with his triple crown ways in the first main event latching onto the rear wheel of Ken Roczen’s Honda, but it was not meant to be. Roczen just had that litte bit extra that Tomac could not overcome and had to settle for the second step on the podium

Jason Anderson: Anderson’s triple crown was much like the first three rounds of the series: quiet. If not for the red flag restart in the third main, he might have ran away with it spoiling Roczen’s perfect night who was buried mid-pack. Roczen made the correction on the restart and Anderson put his Rockstar Husquevarna second to secure third overall.

Austin Forkner: Forkner’s season thus far has been checkers or wreckers. Not so much as a crash at A1 but a mistake and a penalty, then the win at St Louis, then crashing out at A2. What #52 was showing up to Glendale? A model of consistency and smart racing, that’s who! Forkener dominated the first two mains then rode smart in the third main knowing all he had to do was finish right behind Ferrandis , and that is exactly what he did. Forkner is racing himself back into this championship.

Dylan Ferrandis : Bad starts equals great riding from Ferrandis . After the poor decision trying to pass Christian Craig at A2, and still getting the win, how would the size of the Glendale layout treat the Frenchman?  Well, if not for the starts, pretty good. It was indeed the starts that kept Ferrandis is and his Star Yamaha off the top step. His first lap positions were 5-9-5 and giving the field a head start like he did, it was just too much to overcome in the shorter moto format.He lost a few points to Forkner but gained some ground on the points leader Justin Cooper Michael

Michael Moisman: It was a bit of an unorthodox way to get Michael Moisman’s first podium, but he was on the box none-the-less. Not finishing better than fourth in any of the main events, it was more his consistency and lack thereof from his competitors that got him sipping the champagne.  He is starting to show the speed he ended last season with. If he continues, he will be battling for race wins with Cooper, Ferrandis , and Forkner.

This site uses Akismet to reduce spam. Learn how your comment data is processed.